Greggs must never use low standard US pork 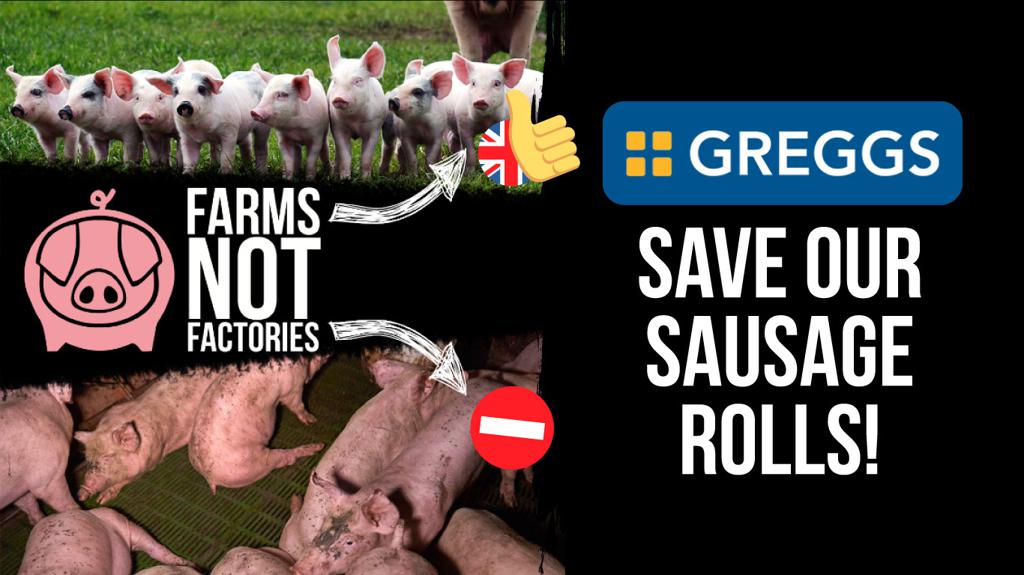 Save our sausage rolls!

The Great British Sausage Roll is under threat. We all know how bad chlorinated chicken is. But have you ever thought about the pork in your sausage roll?

We want Greggs to commit to keep improving the animal welfare standards of their products, and to never using imported pork of lower than UK standards, regardless of any new UK trade deal.

Many UK supermarkets, Nandos and Dominos have already rejected low quality US chlorinated chicken. Now it's time for Greggs to lead the way on pork, and help to protect pigs across the world.

The USA or Brazil has far lower standards than in both the UK and EU. Pigs are reared in cruel, inhumane environments with mother pigs unable to turn around in their pens for almost their entire lives. American pigs are dosed with the muscle-builder drug Ractopamine, banned in 160 countries - And antibiotics on a scale three times that of the UK.

Greggs chief executive Roger Whiteside must commit his company to saying no to animal cruelty and lower food standards.

We want the Great British sausage roll to be truly Great. Sign our petition now!

When you sign the petition this message will be sent to Roger Whiteside.

Subject: Greggs must never use imported pork of lower standards than currently allowed in the UK

The Great British Sausage Roll is under threat.

Sausage rolls are loved by the British Public. What we don’t love is pork from farms with worse cruelty flooding into the UK from US industrial farming. It will hurt British farms and British food standards.

As Chief Executive, we want YOU to commit Greggs to keep improving the animal welfare standards of your products, regardless of any change to UK trade deals. Commit Greggs to not using meat imported from countries whose welfare and food safety standards are below those demanded of UK farmers.

Most pigs in the US are factory farmed, dosed with the muscle-builder drug Ractopamine, banned in 160 countries including the EU and the UK, and given three times more antibiotics than pigs in the UK. We don't want that in your sausage roll.

Nandos and Dominos and most supermarkets have made pledges against chlorinated chicken. Now we want Greggs to take the lead on pork.

Reject cruelly-produced US industrial meat and stand up for British farmers. Commit to only using high welfare UK pork (and beef and chicken) and you’ll see more people coming through your doors.

1,732
of 2,000 goal
collected in 870 days.
We use cookies to give you the best experience possible. Please click on the button to show that you have understood
OK